This is a gesture remote car where I can change the direction of the car using my hand. 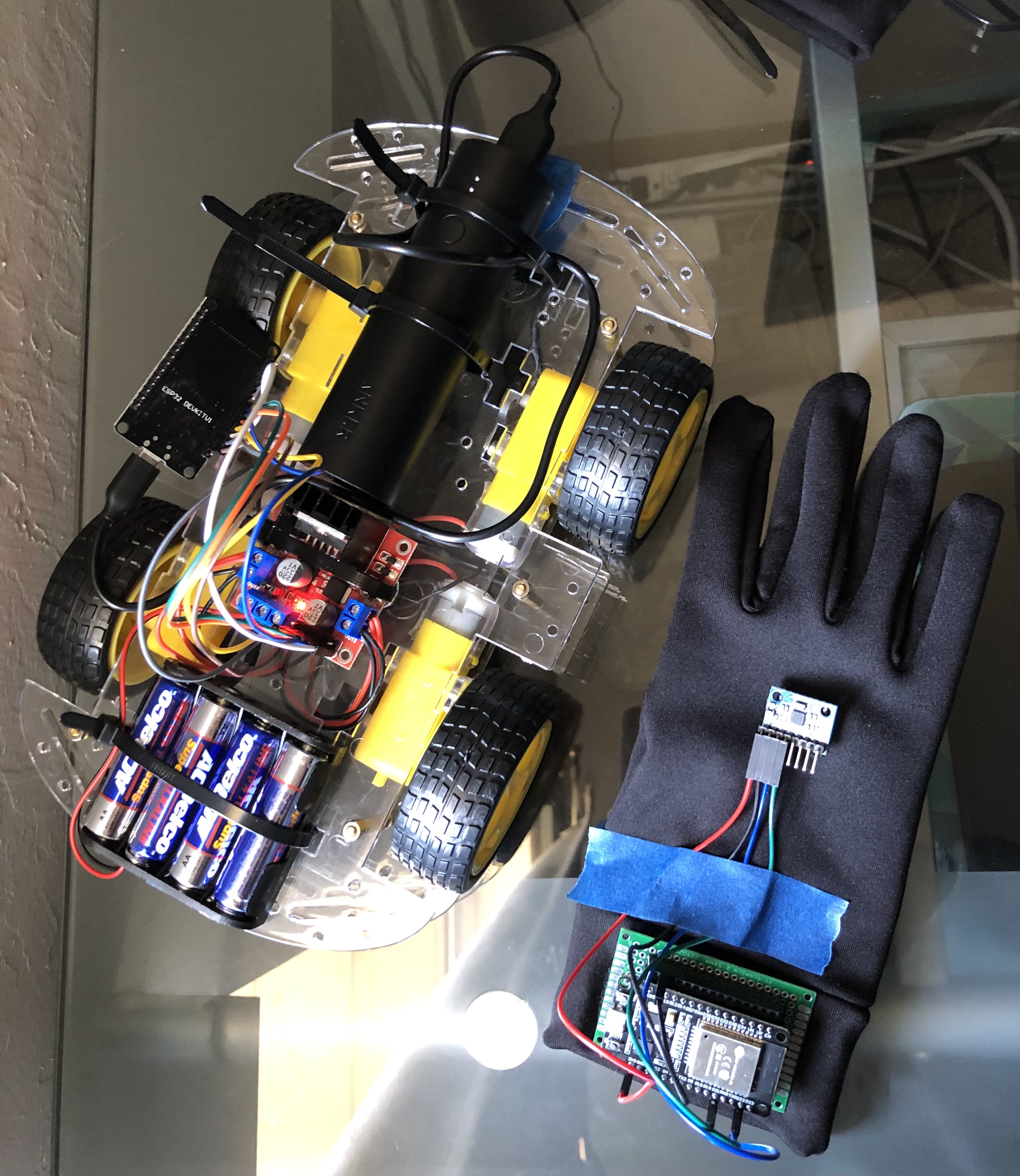 I created two different Arduino codes for each of the two ESP32s used for my gesture remote robot car. The sender code is connected to the accelerometer and my receiver code is connected to the motor driver. I am able to communicate between the two ESP32s by adding the MAC address of the receiver to both of the codes as well as creating a struct continaing the float roll value, float pitch value, and the bool sent. Having the MAC address of the receiver in both codes makes sure that the accelerometer ESP32 sends the information to the right ESP32, which is connected to the motor driver. 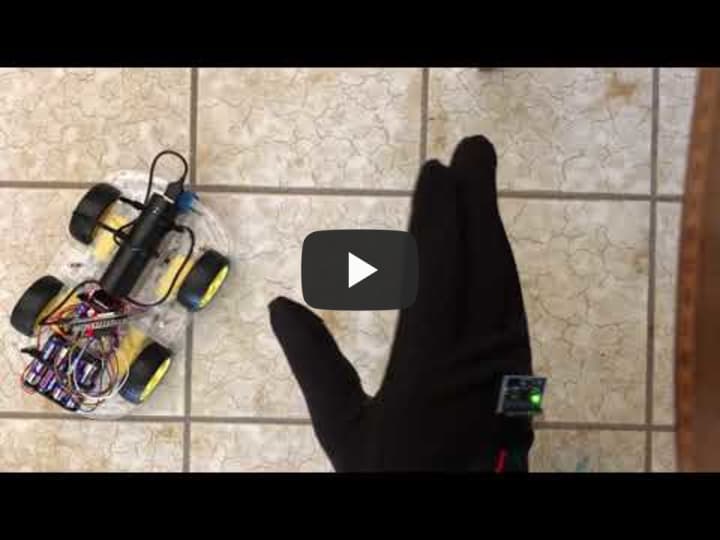 My second milestone was building the chassis of my gesture remote car. I also placed the motor driver on top of the chassis and connected my accelerometer to the esp that was also connected to my motor driver. Instead of using three different states to make the car move either forward, backward or stay still, now I use the accelerometer to change direction. An accelerometer identifies the force of gravity in all three axis: x-axis, y-axis, and z-axis. The sensors measure the opposite force of gravity in the accelerometer and the output of the sensors are based on the direction of the force of gravity. The total length of the gravitational vector can be found using the pythagorean theorem with the sensor’s output. I use the accelerometer by identifiying the angles at which my hand is, which has the accelerometer on top of it. Based on these angles, I coded it so that if I change the direction of my hand more forward or backward, then depending on the angle, then it’ll move the car forward and backward. Along with the previous void functions I have fo rthe motor driver, I added two new void funtions: void left and void right. In my void loop functions I made all my codes for the angles to be after “if” and “else if” statements. 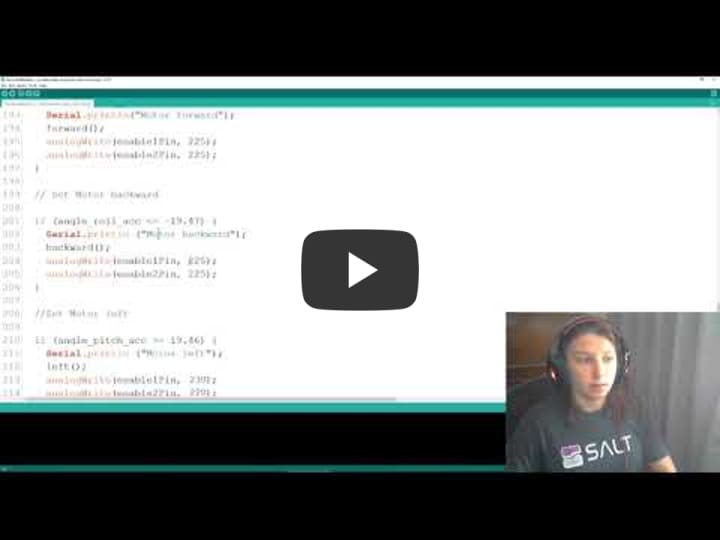 My first milestone was controlling the motor driver through the e sp32 serial monitor. A motor driver can control the speed of two motors for my gesutre remote car by controlling the PWM output. PWM is a pulse width modulation, which uses digital signals to emulate analog signals by turning the voltage on and off at a fast constant rate. In the motor driver there is also a H-Bridge that can control the direction of the current flow, which changes the rotation direction of the motor. Using this H-Bridge allows the car to move forward or backward. I first wired up my esp32 to connect with two motors, an external power source, and a motor driver.

I also used a pwm signal to keep the motors at a steady state when they are on. I change the state of the motors by inputing 2 different numbers, seperated by a space, into the serial monitor. The three states that I created are: forward, backward, and still. Each direction is based on The first number I put into the serial monitor is either a 1, 2, or 3 depending on what state I want the motors to be in. The second number I use is to represent the speed between 0 to 255 of moving the information from the PC to the esp32. After putting these values into the serial monitor, then it writes back either "Motor Stop", "Motor Forward", or "Motor Backward". 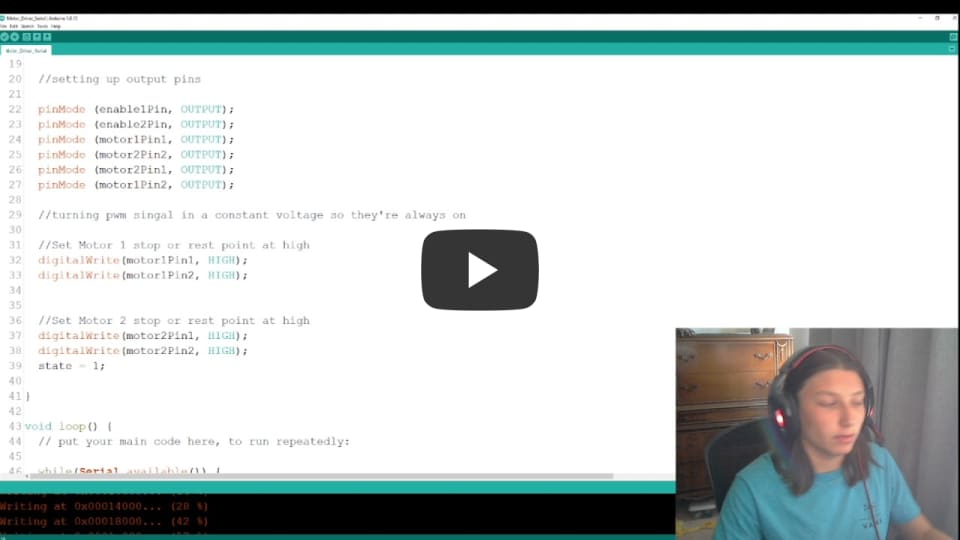